How sustainable is Corten steel?

How sustainable is Corten steel?

The industrial heritage of this site inspired the exterior cladding, which departs from Architype’s natural finish. Corten offers a contemporary response to the site’s history, which weathers to a vibrant orange patina.

The surface of Corten develops to a stable rust-like appearance with no maintenance required. By allowing the steel to rust, it forms a protective coating that slows corrosion in the future.

Corten steel can be used without any painting or surface treatment for 80 years. More than 100 years. Due to its long lifespan, corten steel saves raw materials, reduces reconstruction, painting, and secondary pollution, and requires no maintenance.

In addition to being made from pre-and post-consumer recycled steel, Corten is 100% recyclable. Moreover, the warm rusty color and changing color tone with time are very compatible with other building materials. We prefer bare concrete, reclaimed wood, exposed brick structures, etc.

Corten steel was primarily used at Bridge in the early days. Eventually, it expanded to railways, containers, vehicles, power plants, and steel structures, and is now used widely for architectural decoration and beautifying art. Applications are becoming more and more widespread and popular. In the future, weathering steel will become an indispensable building material as its cost decreases. Recycled corten steel can be used for many purposes like building, construction, etc. 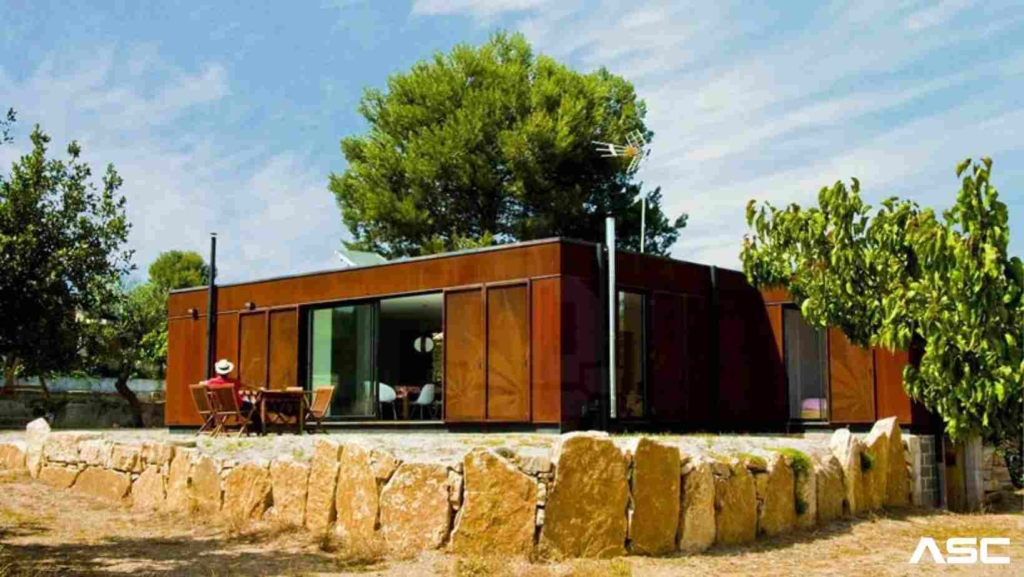 Architecture and landscaping often use corten steel, also known as weathering steel. With its weathered look, it is strong, durable, and timeless. Corten steel Sustainability is corrosion-resistant, tensile-strength steel. The genericized name COR-TEN steel, trademarked by U.S. Steel in 1993, has become the brand name commonly used to describe weathered steel, even if it isn’t COR-TEN steel. Originally, it was used to make railroad cars more durable.

The use of weathered steel has fascinated architects and designers, rapidly becoming one of the most popular materials used in architecture, especially in landscape architecture. This material doesn’t require painting and is virtually maintenance-free. This simplifies the design process and streamlines projects. All types of products can be designed using this material, including benches, planters, bike racks, and barriers. As a result of its versatility, designers are turning to this as a solution more and more.

Corten steel, because of its unique maturation/oxidation process, is considered a “live” material. Colors can change over time based on the shape of the object, the location in which it is installed, and the weathering cycles it undergoes. In spite of the fact that this oxide “leak” is a natural process, it can stain certain surfaces, such as concrete. It generally takes 12-18 months for oxidation to reach maturity. As a result, the topical rusting doesn’t penetrate the steel, allowing it to naturally build a layer of protection against corrosion. The coating prevents most weathering effects (including rain, sleet, and snow) as well as atmospheric corrosion.

Steel with increased resistance to atmospheric corrosion was in high demand in 1930s Industrial America.  This steel would be ideal for railway heavy haulage carriages and steel bridges that are notoriously difficult to maintain.  Thus, US Steel’s scientists discovered weathering steel, which they promptly trademarked and named Corten. Corten is named after two of its key characteristics: corrosion resistance and tensile strength.  It is extremely strong and light (sheets are manufactured at a standard thickness of 14 inches).

Instead of being an intended feature of this discovery, the rust-like patina was a by-product.  Even though Corten is still used industrially (construction of containers is a great example), it is best known for use in buildings and public spaceshitects, who admire the uniqueness of each section after the oxidation process is complete, and the natural evolution which renders conventional environmentally harmful maintenance, such as painting, unnecessary.

Corten is a steel alloy, which means it is ‘mixed’ with chromium, copper, silicon, and phosphorus during the manufacturing process.  The amount of these elements influence the mechanical properties of the resulting weathering steel, which is reflected in the different grades of Corten, which will be discussed further in this article.

Unalloyed steels have a porous oxide top layer that holds moisture, resulting in rust.  Eventually, this rust layer will flake off, exposing a new oxide layer to rust.  Eventually, the steel will rust through as this process is repeated.  Even though Corten is not rustproof, the chemical reaction of the alloying elements to meteorological conditions prevents corrosion by forming a protective rust-colored oxide layer over the steel.  This protective layer, called a patina, prevents deeper rust penetration after weathering is complete.

Patina’s orange-brown color comes from the copper content of the alloy mix, which is usually around 5%.

Weathering is heavily dependent on meteorological conditions, so it is impossible to determine how long it will take.  Generally, the process takes six months.  It may take 2-3 years for the protective patina to form in rural environments free of pollutants, but it will form very quickly in marine environments.

About the Author: Santosh Khambal